Wrinkles in the brain are caused by higher cognitive processes - like memories and languages. So essentially when you learn something new, another wrinkle (or fold) is created in your brain. Thanks to my scientific husband for teaching me this, I decided it needed to be the new title for what I hope will be a new blog series- new things I learn each week. It’s gonna be awesome!

Wrinkle #2: Cocoa-cola (my favorite soft drink) gets its flavoring from vanilla, cinnamon, nutmeg, citrus, and other flavors.

Until next time fellow nerds. 😘🤓
Posted by kellie at 3:07 PM No comments:

In the stages of grief, loss of memories isn’t mentioned. Which sometimes makes me feel like I’m the only one there.

After a loss, a common phrase that gets thrown around is “time heals all wounds”. But what they don’t tell you is that in that sadness you still have memories to cling to. Time not only took away the pain, but it seems to have stolen my memories too. After 18 years, there just seems to be a large, gaping hole.

Whenever the death of my dad comes up, especially when I tell the story to people that have never heard it, most apologize for having to make me relive it. But what is hard to explain (mainly because I don’t want to sound like a psychopath) is that it doesn’t make me sad to tell it anymore. After 18 years, I feel like I’m a narrator telling someone’s else’s story.

So either because I a masochist or just tired of not remembering and not feeling sad, I decided to borrow home movies (which yes require a VCR that I totally still have!!!) Although I’m still trying to find all the cords... 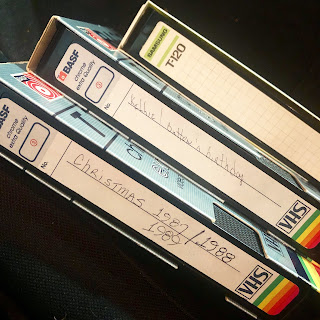 So in the meantime, I am flipping through a memory book I made several years ago (which I am so thankful I created).  I started to fear that I was beginning to forget him already, so I created a book writing down whatI did remember of him- his favorite things, what our Sundays (the only day we saw each other after the divorce) looked like, and what I remembered about him personally. Then it slowly evolved into letter writing to him. It became the only time I could say "daddy" anymore and I treasured it. It also helped in my grieving and missing him, because it was a way to tell him all I wish I could if he were still here.

Posted by kellie at 7:15 PM No comments:

a Florida girl in New Orleans A few weekends ago Austin and I went to NOLA to celebrate our third wedding anniversary. Even though it was in the heat of summer, it was still an amazing time and an adventure since neither of us have ever been.
It was also a pretty short trip since neither one of us could get away for too long and it is an 8 hour drive for us to get to the BIG EASY.  But totally worth it. 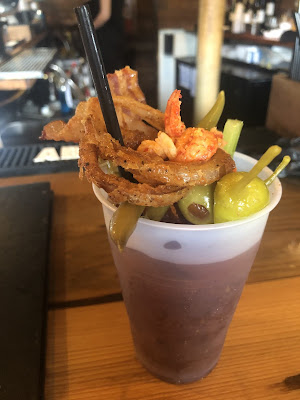 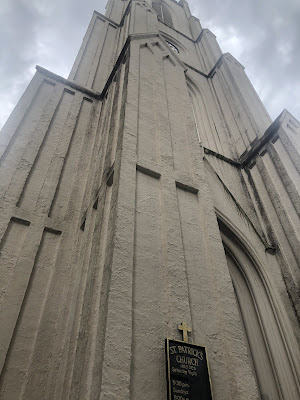 We did a lot of walking (because parking in French Quarter is insane) and I loved it. Sometimes I really dislike living in a city where you have to drive to get anywhere. 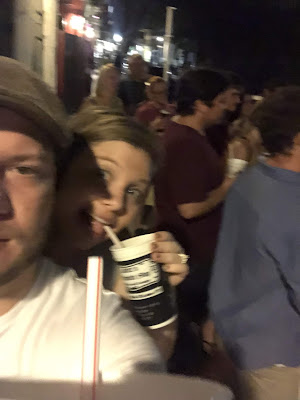 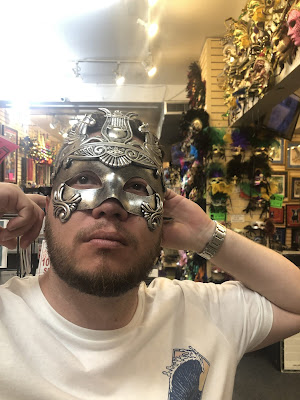 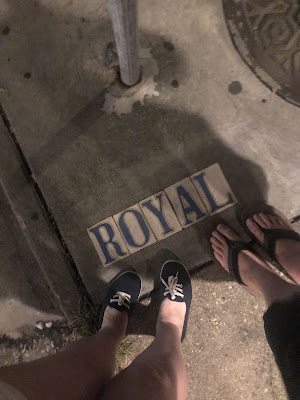 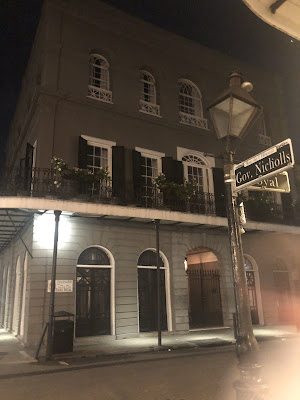 For the first day/night there we mainly wandered around.  Our hotel was not even a block off of Bourbon street (which was amazing!)!
When we first arrived our hotel wasn't quite ready and we got stuck in a massive rain shower.  We spent the next couple of hours trying to explore, but without being able to have my phone out for navigation and being completely soaked, I was not a happy camper. I was more than a little overwhelmed and my anxiety kicked in to overdrive. But once we were able to drop off our bags at the hotel and I knew where we were and where we wanted to go, I settled in and my nerves settled (the Hurricanes didn't hurt either).
We decided for our first night to take a Haunted History Tour (which is a bit different from the ones I've gone on in Savannah and St. Augustine.  A guy that is a part of the Tour company followed the groups around with a cooler of water and beer (amazing).  And on our half way point stop we were able to visit the longest running bar of NOLA (or get a po-boy ice cream sandwich). The fact that the city does not sleep, but continuously party helped around 11 when we wanted dinner. By the way, BEST PO-BOY of my life. 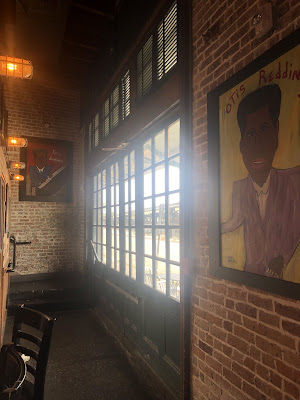 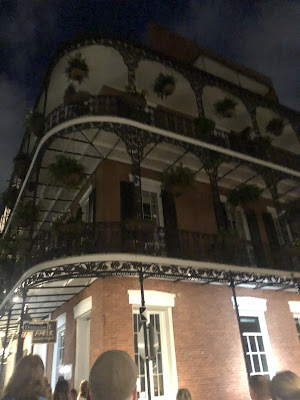 We also stopped into BB King's Blues Club for a drink and some good blues music.  I love that Austin took the time to introduce me to the amazingness that is Blues and Jazz. 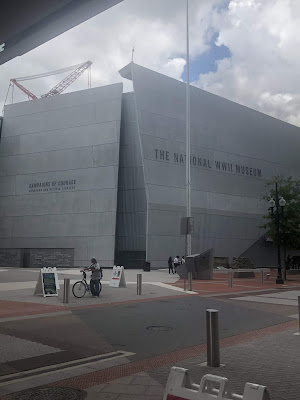 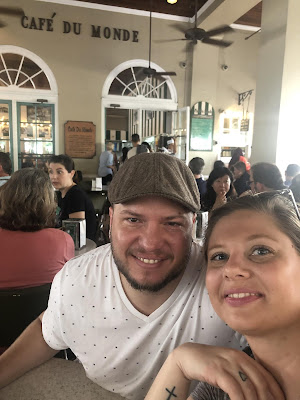 During the day to escape the heat (and because we both love learning about WWII) we walked to the WWII Museum. First of all, it is enormous! We were there all afternoon and still didn't feel like we got to see everything. They've done an amazing job with that place.

On our last day, we also stopped at Cafe Du Monde (which I've grown up hearing about).  Their beignets and frozen cafe au lait was absolutely delicious. I wish I could go back for more right now. 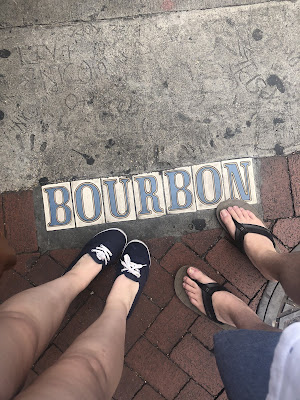 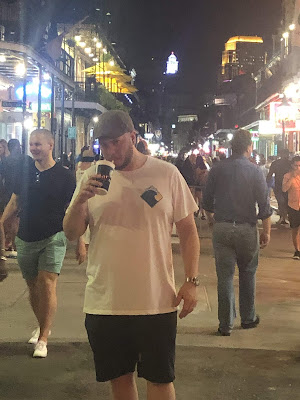 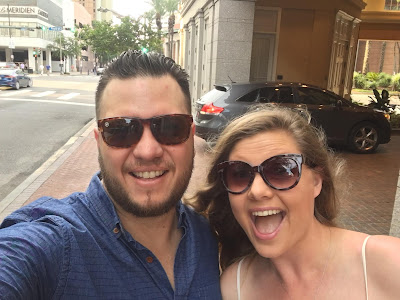 For our actual anniversary night we went to the NOLA Ruth's Chris, which was nothing short of fantastic. Another perk to being with Austin, he has taught me more about delicious food that I probably would not have tried without him. 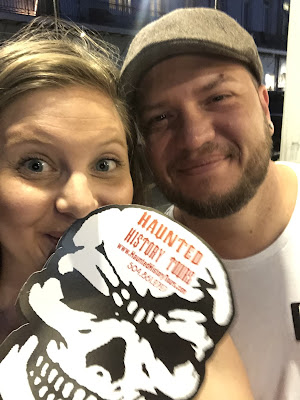 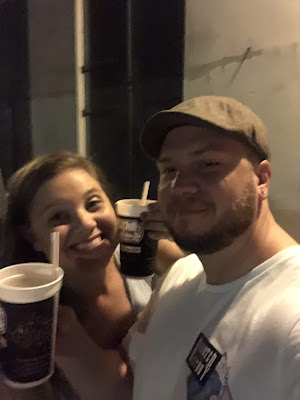 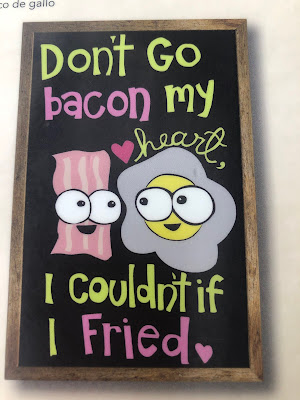 This sign is from where we got brunch one day, Ruby Slippers (wow, their biscuits!) 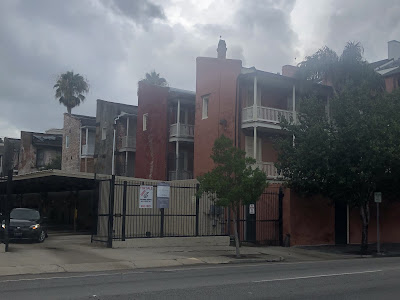 While there is so much about NOLA I loved, I think their architecture is one of my favorite aspects of the city. It's so different and gorgeous. I could stare at it all day. Weird? Maybe, but oh well. 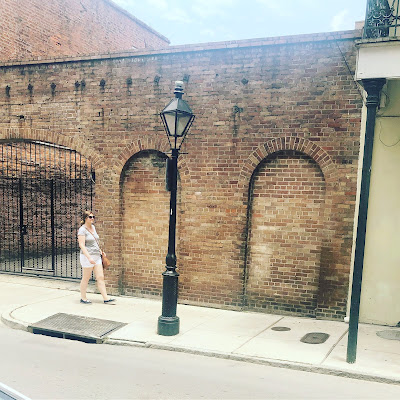 Before we left,  I had to stop by NCIS New Orleans Headquarters (aka a parking lot that filming makes seem like is home to the NOLA Headquarters). I heard that they began filming the next season while we were there, but sadly I didn't run into anyone from the show. Major bummer. 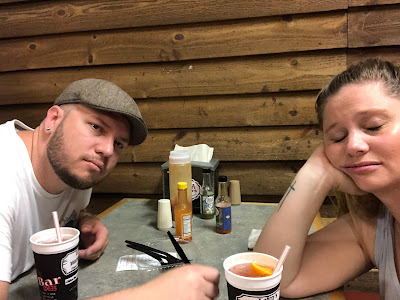 Ha. Austin thinks its odd that I posted this photo above, but honestly I was so exhausted.  It was our first night in NOLA and it was a long one. 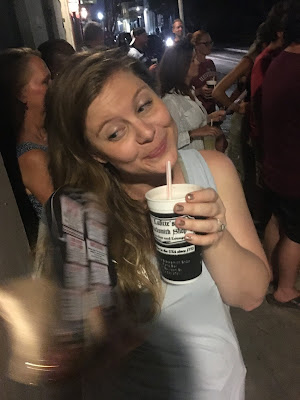 So all in all, a great trip. I can't wait to go back (Halloween maybe?)

Posted by kellie at 5:56 PM No comments: